On the last dev logs, we talked about the birth of West of Time and the team behind it. Today, we will focus on how the game evolved since the first version and what we have planned for the next coming months.

How the game evolved in 7 weeks…

As we saw on the first dev log, West of Time almost didn’t exist! We had plenty of ideas but they were either not possible in such a short amount of time considering our knowledge, either already existing exactly as we had them in mind.

But we found this idea of a spirit wanting to sow discord in a little far west town using time control, which all the team liked and that’s it! Starting from this, we did a paper prototype to begin to try the basics of the game design.

This was the first prototype ever of West of Time. 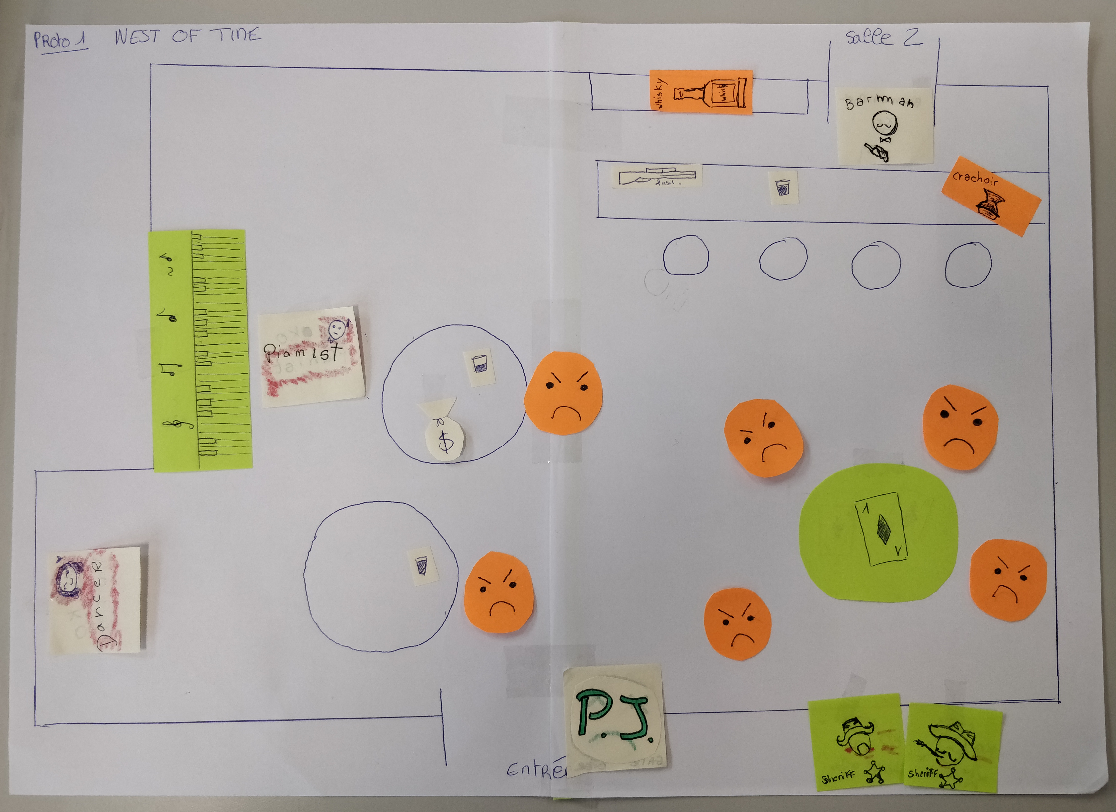 As you may see, on the construction of the level, not a lot of things have changed. We cut the second room behind the barman because we wanted to focus and polish as much as possible the first room. We also removed the 2 sheriffs at the entrance and did a scene focused on the inside of the saloon.

The biggest improvement came with the development. As our mechanic was working well and as we thought, we mostly worked on the feedbacks and the signs.

For example, the game was first playable with a controller, and you had to move the spirit from one object to another to sow discord in the saloon.

We quickly understood that we assigned too many buttons on the controller and that the character was not mandatory. So, to simplify everything we decided to put the player at the place of the spirit, and to replace the controller by a mouse and the space bar.

Our second biggest work concerned the “stopped time” phase. On the first prototype, the player had to swap objects in order to change their positioning.

But as you can see, on the 7th week, we decided to put the object on a surface, wherever the player wants to.

Finally, our last main change was the “conclusion scene”. In the first version, all the events were happening at the same time, and the player was not able to understand everything he triggered.

On the last version, all the scenes are triggered one by one, with dialogs, so the player can understand the consequences of his actions.

Of course, those were not the only changes, as a game is meant to be evolving between its first idea and the development. But they were the most important ones.

… and how it is still evolving!

We had several occasions to show West of Time to players: school showroom, final oral, and a little indie convention named Indie Game Nation. This allowed us to collect as many feedbacks as we could to understand better the needs and expectations of our players.

So, since January, the whole team is working on the polish of the first scene.

As all the team is now on internships for their studies, the development takes more time because we do not have all day dedicated to our game. But we definitely want to continue and follow our idea to the end!

Almost all the team at Indie Game Nation !

But what’s next, now?

As soon as the existing level will be fully polished according to the new Meta Game, we will post the demo here, on itch.io. We can’t wait to upload our game to the world and to receive more feedbacks and advices from you, our players.

When this will be online, we will continue developing the next levels until we consider we have enough to release a first version of the game.

We think that players’ feedbacks are the best way to improve and make a better game, that’s why we will also try to present West of Time in as much conventions as we can!

We will keep you updated on all the next steps here on itch.io, and also on our social medias: Facebook and Twitter (where we post a new screenshot dev-related every saturday!)

Thank you for reading, and see you soon for more news about the game !

Get West of Time

Embody a amerindian spirit and spread chaos by controlling Time.